Just added to your cart

Adding product to your cart

Spanning three decades, this box set presents four of actor/director Sidney Poitier's lesser known, but still historically and artistically important films, including the long-unavailable debut of Hud filmmaker Martin Ritt. Originally called A Man Is Ten Feet Tall--the title featured in the accompanying trailer--Edge of the City combines the rough with the smooth as Midwestern transplant Axel (an excellent John Cassavetes) takes a job at the New York docks, where he enters the spheres of the open-minded Tyler (Poitier) and close-minded Charlie (Jack Warden). To Tyler, the racist foreman represents "the lowest form of human life," but Charlie helped Axel to secure his position, so the latter kicks him back a portion of each paycheck. Things start looking up for Axel after Tyler and his wife (Ruby Dee) set him up with a shy schoolteacher (Kathleen Maguire), but then Charlie takes his extortion campaign to the next level and corruption leads to homicide. In retrospect, Ritt's first film plays like a precursor to Cassavetes' directorial debut, the Big Apple-based, African-American-oriented Shadows.

One of the first studio films to deal with interracial romance (or even the possibility of it), A Patch of Blue was a huge hit upon its release, appealing to those looking for both social protest and a smart date movie. Poitier plays Gordon, a compassionate stranger who befriends a blind white girl named Selina (Elizabeth Hartman). Selina, the next thing to a shut-in, can only judge people by their voices, and Gordon's is unusually patient, kind. Troubles ensue when Selina's abusive mother (Shelley Winters in her second Oscar-winning performance) happens upon the pair during one of their park rendezvous. Ivan Dixon plays Poitier's militant brother, and veteran Wallace Ford appears as Selina's kindly lush of a grandfather. Jerry Goldsmith earned an Oscar nomination for his lilting piano theme, surely one of the simplest, most effective pieces of music to grace a Hollywood film. With commentary from director Guy Green.

For Something of Value, Richard Brooks, who directed Poitier in Blackboard Jungle, takes on Richard C. Ruark's bestseller in which boyhood friends become bitter enemies. Born and raised in Kenya, Kimani (Poitier), a Kikuyu native, and Peter (Rock Hudson), the son of British settlers, live as equals until they reach adulthood in the mid-1940s, by which point Kimani's limited options lead him to join the Mau Mau's struggle for independence. Though a solid Hudson receives top billing, Poitier steals the show, not least because he speaks with an accent, while Hudson does not This version omits the original Winston Churchill introduction, but still ends with his resonant quote, "The problems of East Africa are the problems of the world." The set concludes with mystery-romance-glorified PSA A Warm December starring director Poitier as doctor and motorcycle racer Matt Younger. On vacation with his daughter in London, the widower falls for Catherine (Esther Anderson), a foxy mama harboring more secrets than the script can bear, like a rare medical condition and men who follow her around town. If December is the weakest entry, it still offers its pleasures: groovy threads, funky Afro-beat, and the chance to watch Poitier cut a rug. By 1974’s Uptown Saturday Night, he would find his footing as a filmmaker. Consider this collection, then, a closer look at his talents as an actor of rare sensitivity and conviction.

Includes: Edge of the City, A Patch of Blue, Something of Value, A Warm December

All movies have English mono track and English and French subtitles.  All but A Warm December also have a French mono track.  A Patch of Blue also has Spanish subtitles. 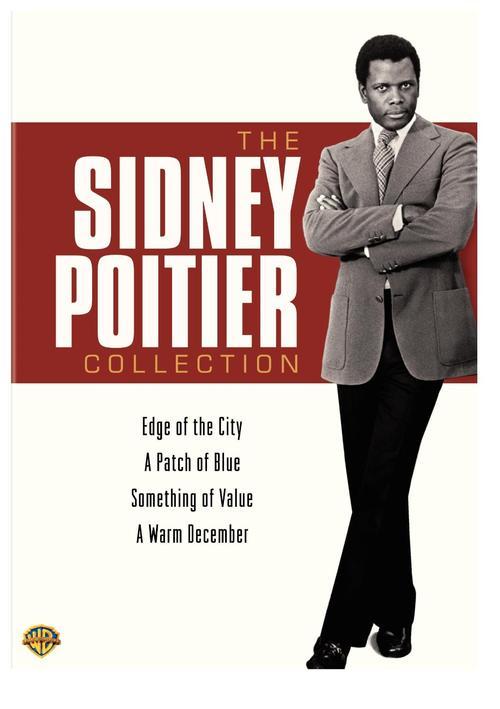 ALL OUR ITEMS ARE 100% GENUINE OR YOUR MONEY BACK